Today I was joined by two more groups of eager urban foragers, to harvest some more of the strange fruit which currently fall on several Amsterdam streets.

We harvested from Albrecht Durerstraat mainly. Although the enormous glut of fallers from last week, had already been removed by the council street team, we still found several bags full. There are many fruit left on the some of the female trees, it’s not to late of you want to try and haven’t yet had a chance.

On my way home from work I noticed more streets which are home to Ginkgo biloba trees. This photo is of Handelstraat. I didn’t walk the street to see if it houses any fruit bearing females. Jennie Akse, who came along today, told me about a lovely female Ginkgo in Beatrixpark which is shedding fruit on the grass.

There are many places to harvest at the moment. People have asked if I know of any Ginkgo on Amsterdam West and I don’t. Of you do, please let me know.

Here’s a link to my post on how to safely harvest and prepare the fruits. It’s the nuts that foragers are after, the soft fruit part is toxic.

This Gingko tree grows outside of the Muiderkerk on Linneausstraat and is much younger than those I’ve found in Oud Zuid. It’s also not loaded with ripe orange fruit so is most likely a male tree. The leaves of both male and female Ginkgo can be used to make a tea. The plant, including it’s leaves and especially the fruit, does contain some chemicals which are harmful so if using them, read up carefully on how to harvest, how much to use and whether it will interact unfavourably with your body.

Here’s one of the beautiful Ginkgo street trees that I’ve been harvesting fruit from again today. There are still hundreds beneath the female trees in parts of the city. 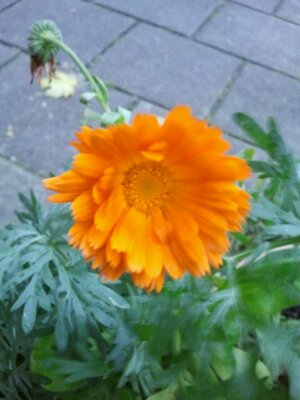 Also a windswept Calendula officinalis flower with a little Wormwood (Artemisia absinthium) foliage behind – both in a tree pit.

Today I prepared the Ginkgo nuts which I harvested from Albrecht Durerstraat, in Amsterdam Oud Zuid, yesterday. They taste great and the three of us are showing no ill effects from eating them this evening! To prepare Ginkgo nuts, a few methods may be employed. All involve removing the toxic apricot coloured flesh (sarcotesta) from around the precious nut, without harming yourself. The sarcotesta contains the irritant found in poison ivy so wear rubber gloves and be very very careful and if your skin or eyes do become irritated, seek prompt medical attention.

1. Soak your gingko fruit harvest in a bowl of cold water, away from animals, children or prying hands. An hour our two is sufficient to fully hydrate the flesh, making it very easy to remove.

2. Wearing thick rubber gloves, simply rub the flesh off the nuts, into the soak water. Rub them off under the water, to avoid them squirting into eyes or surfaces where the toxic juice may go unnoticed. As each nut is exposed, place it in a small bowl. 3. Strain the water away, compost or bin the flesh. Rinse your sink drain well after this as the flesh starts to stink of apricoty vomit as it rots down. 4. Give the almost clean nuts another rinse in clean cold water, to remove almost all of the flesh (this is very quick and simple). Drain them and leave in the small bowl.

5. Spread the cleaned, wet nuts on a baking tray and place in an oven, preheated to 80°C (to dry off and store then – remove from oven when the surface is totally dry) or to 180°C (to roast)

6. To roast at 180°C in an oven (or in a small sturdy frying pan) simply leave them in the heat, toss them around once or twice and remove when the outside of the nut shells looks just toasted in places. Test one. 7. When cracked open and the inner skin peeled off, a ginkgo nut should be like a very firm jelly but not rock solid, the colour should be a beautiful translucent green. Mine took about 15 minutes in the oven to reach this point today.

For some years, each autumn, I have trudged through putrifying Ginkgo fruits, fallen amongst fossilesque golden Ginkgo leaves, on Albrecht Durerstraat in Oud Zuid, Amsterdam. It is where I work and is a street that the local council chose to line with this amazing tree herb, many moons ago.

Ginkgo biloba is a fascinating plant. Often known as the Maidenhair tree or the living fossil tree, it is incredibly resilient to damage and pollution and is well suited to the urban environment. It has been long revered by traditional Chinese and Japanese medicine and apparently has many uses, particularly for the circulatory system.  This is apparently the most adulterated herbal extract that people buy. Most people seem to take the extract to improve their circulation, for cold hands and feet for instance and to boost their memory. Be aware that there is much conflicting evidence about the effectiveness of Ginkgo for memory loss and demetia. As ever, treat all claims with caution and if trying something new, be very cautious. Here’s a summary of the current research.

This lunchtime I was joined by 5 adults and two snuggly wrapped babies, to harvest some Ginkgo nuts which have dropped onto parked cars and the pavement.  The flesh (sarcotesta) around the nuts is HIGHLY TOXIC, containing the same chemical as poison ivy. Anyone wishing to harvest, should avoid touching it.  The chemical causes a very serious skin reaction and requires prompt hospital treatment.  Likewise, because Ginkgo acts as an anticoagulant, if you are already taking drugs which act to “thin the blood”, you should avoid the herb and consult your doctor for advice, if you really think it could be of benefit to you.   If you are allergic to aspirin or nuts, this is also a herb to avoid.

Please follow the instructions in this link if you want to know how to prepare the nuts. Note the rubber gloves and photo of blistered eyes, on that website!

By removing these smelly fruits from the pavement we are sparing the local residents from some nasal pollution and are harnessing an urban resource that people in some other countries would be very envious of. 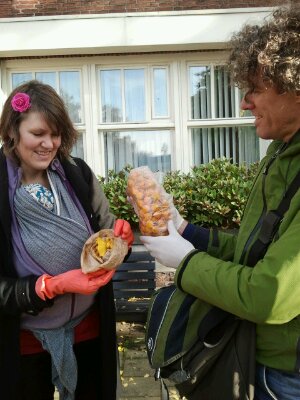 So if you want to join me and a few others on Friday at 12:35 or on Tuesday at 12:45, please come equipt with a pair of rubber gloves, a couple of sturdy plastic bags and perhaps a spoon or chopsticks, to pick up the fruit.  Much of the current harvest has already been swept into the gutter but this is still fair game for the well prepared forager! We’ll be meeting outside of the AKO newsagent, on the corner of Beethovenstraat and Gerrit van der Veenstraat (trams 24 & 5). I’ll be wearing my yellow raincoat and rubber gloves 🙂

After lots of rain yesterday, lots of fallen ripe Ginkgo fruits beneath female trees. The nuts within are edible when cooked but they take some careful preparation as the flesh surrounding the nuts is very unpleasant – to skin and nose! I posted recently about how to prepare them.

Firstly today, fragrant and edible flowers of the urban prolific Rosa rugosa. It is much used by urban landscapers and I think, underused by urban foragers. To be used as any other rose, ensure they are clean and unsprayed as ever.

Next is Cleavers (Galium aparine), still looking fresh and cleansing in the Volkstuin area of Frankendael.

Here is a mature Ginkgo biloba tree which I hadn’t noticed until today. Recently I learned that in some parts of the world it is illegal to plant female Ginkgos because the smell of their fruit is so obnoxious! Perhaps this one is a male? Either way, the leaves will be ripe for the picking and eating or tea making in a few months. There are a great many Ginkgos in Amsterdam.

Above is a small Ladies mantle (Alchemilla) plant. This is a bitter and very useful herb. I grow several on my roof and sometimes eat the flowers as a garnish. The leaves are good as a bitter tea and can be used to make a good breast toning oil. That is one of their traditional uses.