The Amsterdam marathon is taking place as I write this. We caught a glimpse of the leading group as they sped along Hugo de Vrieslaan this morning.

Tomorrow morning I shall be up before the lark, to join the English Breakfast Radio show in Amsterdam. Presenter Cathy joined one of my September herb walks. I look forward to meeting her again, along with her team. To tune in and here us at around 8am tomorrow, tune in to 99.4FM, look at http://www.englishbreakfast.nl or watch the show (7-9am) on Salto 1 TV. I hope they are gentle with me at that early hour!

Haven’t had time to take many other photos today but did spot this beautiful clump of Hollyhock (Alcea rosea) foliage. It is often realised that Hollyhocks look like Marsh mallow plants and sure enough, the two species are very closely related. In western Europe only the flowers of the plant were used medicinally and the leaves were used as pot herb. All parts can be used however, for many different ailments. It is best known as a nice remedy for sore throats and minor chestiness. Most simply, you can steep the flowers in honey to make such a soothing remedy or drink tea, made from any part of the plant. 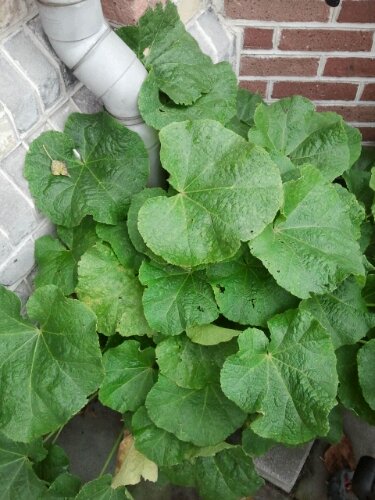 At this time of year, few flowers remain on city Hollyhock plants so we are left with the foliage. To use it, be careful only to harvest a small proportion of a plant, perhaps one medium sized leaf in every five.

Clean your harvest, surface dry it thoroughly (clean tea towel and a warm place) and chop it finely.  Add it to some warm ghee in a small, heavy based saucepan. Add enough ghee to allow for free movement of the chopped herb in the melted ghee.

Simmer really gently, stirring constantly, until the foliage starts to crisp up. When this happens, remove from the heat and strain the infused ghee through a cheesecloth or similar super clean fabric.

Store in an airtight container and use on rough skin. Amongst other things, Hollyhock is an emollient, it has the ability to soften skin.

Remember to return the used herb to the land. Hollyhock infused ghee should keep well for a year or so, I prefer to refrigerate mine. Discard (to the land) if it begins to look or smell peculiar.

If I was forced to have just a single herbal mission in life, I think it would be to teach city people just how useful Hollyhocks are and to encourage their proliferation and use (is that two?). Hollyhocks are a perfect urban herb, in my opinion! They have a multitude of uses, many linked to soothing or maintaining a healthy respiratory systems. They grow really well in sandy soil, especially with the support of a building beside them, they look spectacularly beautiful for months long and they are so easy to harvest, store and use.

In my mind Hollyhocks are an urban blessing. They cohabit with the people who most likely live in pollution and can solve many of the ills which air pollution brings upon us.

Here’s a link to a colorful post about Hollyhocks from a blog called Choosing Voluntary Simplicity.

Here again is the Plants for a Future link, about Hollyhocks. Prepare to be impressed by its uses around the globe 😉