We had a lovely walk to Jeugdland in Oost Amsterdam today and founds lots of wonderful herbs along the way and at the playground. 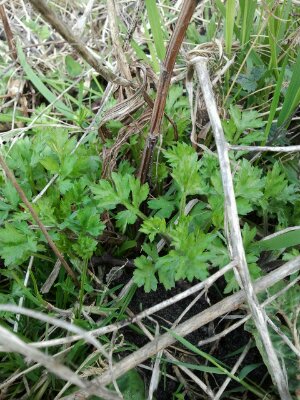 Mugwort (Artemisia vulgaris) NL: Bijvoet.
This is the first I have found this year and as it’s a regular part of my diet I am delighted that I’ll be able to eat it fresh (rather than dried our in vinegar) from now until the autumn. This plant is a little too small to harvest from but it won’t be long until the leaves are well established. This one was especially easy to identify because some of lasts years dried stems and give away foliage were still attached to the plant.

Elder (Sambucus nigra) NL: Vlier. Here it us growing out from beneath a bridge.

And Yarrow (Achillea millefolium) NL: Douzendblad. Thousands of succulent, medicinal and edible (for some, in moderation) leaves, along Valentijnkade. I suspect they are enjoying the warmth of the brick walk beside the old Jewish cemetery. These are the biggest and best looking I’ve seen since last year. 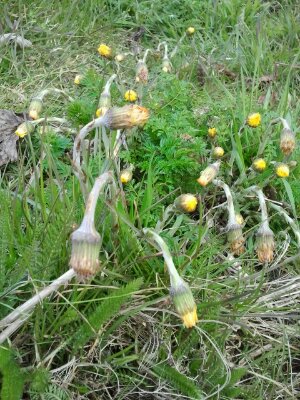 Now my eyes are open to them, I’m finding clumps of this unusual looking flower all over the place. Unlike Dandelion, the flowers come up long before the leaves. Here you can see fresh just about to open flowers along side those which bow their heads and are starting to set seed. Wonderful and so easy to capture the properties in honey.

More molehill collecting for me today. I’ve been busy repotting some balcony herbs and took the risk of sowing a few seeds. So more soil was needed!

Some of the molehills in park Frankendael are very sandy, others are full of organic matter. Here’s a sandy one – just right to add drainage to the organic soil I bought from Albert Heijn. The little Plantain (Plantago major or media) in the photo was completely covered by the hill until I scraped the top soil away. Just that one molehill filled an empty 5 litre soil bag. Plantago media is an endangered species in the Netherlands, so if that’s the plant I’m extra happy. Either way, my molehill antics provided free soil for me and a freed herb for the park!

I’ve found lots of Coltsfoot (Tussilago farfara) today, both in the park and other parts of town. I’ve been collecting some of the flower heads to make Coltsfoot honey. They smell amazing when just picked and it’s easy to see why they are a great cough remedy. They are easiest to find in grassland close to water. They look like Dandelion from a distance. But close-up they look like strange Asparagus type scaly things, shooting up as spears through the soil and sending flowers to face the sun before producing proper leaves. Very difficult to mix them up with anything else.

So what else today? 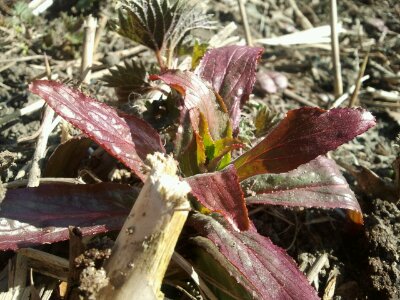 More Motherwort (Leonurus cardiaca) NL:Hartgespan. If in doubt of this plant (but certain it’s a square stemmed Labiate) nibble a tiny bit of leaf. If the extreme bitterness literally knocks your socks off, it’s Motherwort! 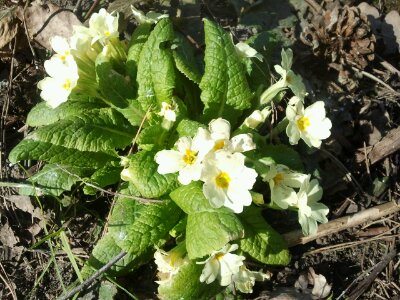 And some lovely buds and shots from which I made a refreshing immune system boosting tea,

Lime tree buds (Tilia sp). Reach for a too high for dogs twig, maybe on a burr such as this. Snap off a fresh tip bud (after checking its OK with the tree of course) and just pop it in your mouth. After a little chewing your mouth will be full of unmistakable Lime tree goo! It’s great stuff for all manner of ailments and makes me feel very happy to know the tree, every time to do it. I can’t really understand why everyone else in the park doesn’t do this. There is some information I wrote a while ago about Lime, for those wondering what all the fuss is about.

Added to my Spring brew (and still really tastes great hours later as I write this and enjoy the second pot) was of course a leaf or two of my new herb friend Common Horehound (Marrubium vulgare).

And finally today, a real taste of the foraging weeks to come – Ground Elder (Aegopodium podograria). Just a few plants coming through today but it’s up! I absolutely love this herb (though it’s often a real pain to gardeners). It’s common English name is Goutweed because it helps clear the body of uric acid amongst other things. I love it because it makes me feel good and tastes rather like Parsley. It can be eaten, used medicinally internally and applied externally in things such as salves and compresses. Learn more about it at the June Embrace Your Weeds workshop which I’m running with City Plot. 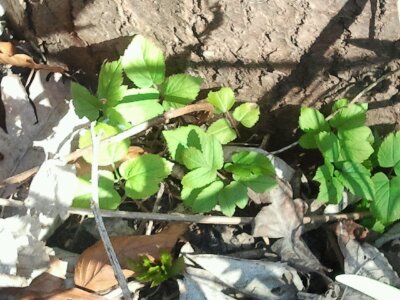 Now back to my pot of Spring Shoots Tea…

I passed by Flevopark this afternoon and saw masses of Wild Garlic, still looking very good! At the front of the photo you may be able to see lots of Elder (Sambucus nigra) shrubs, just coming into leaf.

At the nearby childrens farm and outdoor play centre there were some lovely wild plants and cultivated ones.

Here’s the strawberry planter that I noticed last year..

My favourite find of the day, Coltsfoot (Tussilago farfara). It makes a wonderful mild but effective remedy for coughs. Here’s a link to Susun Weed harvesting and preparing it for such a purpose. Making Coltsfoot honey is very easy and very useful. 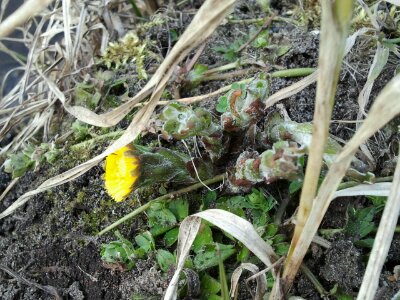 Coltsfoot is of the same family as Butterbur and Fuki which I’ve been noticing a lot lately. All of these plants send up flowers before their kidney shaped leaves. All are quite striking. I’ve never found enough Coltsfoot in Amsterdam to harvest but I’ll keep on hoping.

Here’s a plentiful herb which nobody ever minds me harvesting – Stinging Nettle (Urtica dioica). It is getting better by the day at present.

And lastly today, another plant I was delighted to find on our trip today. These are the cones of an Alder tree (Alnus sp). Alder is the only deciduous tree which bears cones. I’m saving lots which I collected from the ground today, to help create a well dressing. Glennie Kindred has helped revive this ancient craft and I’ll be having a go at making one very soon in Amsterdam. Scroll through the 18 images on that link and you’ll see how the cones are used – quite stunning! Alder comes were traditionally used to create the edges or lines of the designs.

Alder also bears beautiful catkins, giving more than a hint that it belongs to the Birch family. I found a branch of Italian Alder on the ground in Oud Zuid a few weeks ago. That is now growing lovely leaves in a base of water at home. Still no roots though. 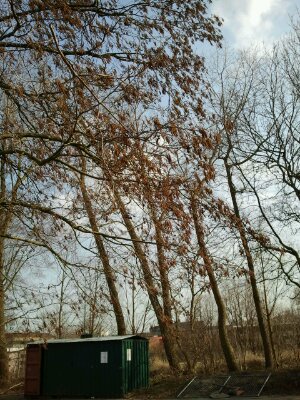 Garlic mustard (Alliaria petiolata) is featured today. I wouldn’t say it is plentiful in the park but I noticed lots of plants, particularly at the base of large tree trunks and along the edges of woodland and hedges. It is just in flower at the moment, so very easy to identify, not only by the distinctive smell of garlic when the leaves are bruised but also by the tiny white flowers at the top of the plant. Garlic mustard is a favorite amongst foragers and can grow up to 120 cm in the right location.

This plant is a biennial and can provide year round nutritious greens, for salads or the cooking pot. All parts are edible. Even the roots can be eaten, they should be harvested just before flowering, but of course removing the whole plant will limit the foraging potential the following year as the plant will be unable to spread by seed.

I see lots of garlic mustard growing around Amsterdam. You are very likely to find it along the edges of canals, hedges and overgrown areas. Now is the best time to identify it.

Other plants, calling out to me today are:
Coltsfoot – starting to open its seed heads which have been turned down towards ground since last week,
Nettle – tops are ripe for harvesting at present, I used plantain to rub away the sings as I forgot my gloves again today!
Mentha x peperita blue balsam – no flowers until later in the year but the spicy, pungent

burnt spice aroma of stroked leaves is ummatched.
Celandine – It carpets parts of the woodland area almost year round but it easiest to identify when it burst into flower, to announce the spring. The last few flowers remain now, especially beneath the trees of the Lime avenue. If you don’t know how to recognise this useful woodland herb, learn now as the foliage is so useful at most times of the year.

I found this cheerful looking Coltsfoot (NL: Klein hoefblad) plant in Frankendael a couple of days ago and thought it was time to look at some look-a-like plants which herbal foragers should be aware of.

Coltsfoot (Tussilago farfara) and Dandelion (Taraxacum officinale), which people often confuse it with, are both members of the same plant family (Asteraceae).  Both herbs are useful but Dandelion is generally the plant which herbal foragers are after. It is such a well known bitter herb and has earned an enduring place in the sophisticated kitchens of many cultures.  Coltsfoot flowers (if enough of them were to be gathered) can be used to make a traditional children’s cough remedy. However there are many who now avoid internal consumption of Coltsfoot, due to the discovery that it contains certain liver toxins called Pyrrolizidine alkaloids.

Many herbs contain small amounts of potentially harmful chemicals but when they are ingested as plant rather than separated chemical they tend to have a quite different effect on the body.  One tip for herbal foragers, who are concerned by toxicity, is that generally flowers contain less volatile and active ingredients than other parts of a plant.  Thus a flower remedy, made from Coltsfoot, should contain less alkaloids than one made from the leaves and roots.

How to differentiate Coltsfoot from Dandelion:
1. The solid & scaley Coltsfoot stem is quite different to the smooth & hollow stem of Dandelion.
2. Both being members of the Asteraceae family, their flowers are similar but Coltsfoot flowers bloom on stems before the leaves have grown.  With Dandelion, the obvious, downward toothed leaves develop well before the flowers appear.